By Ballet News on 1 June 2015 in Cheryl’s Conversations 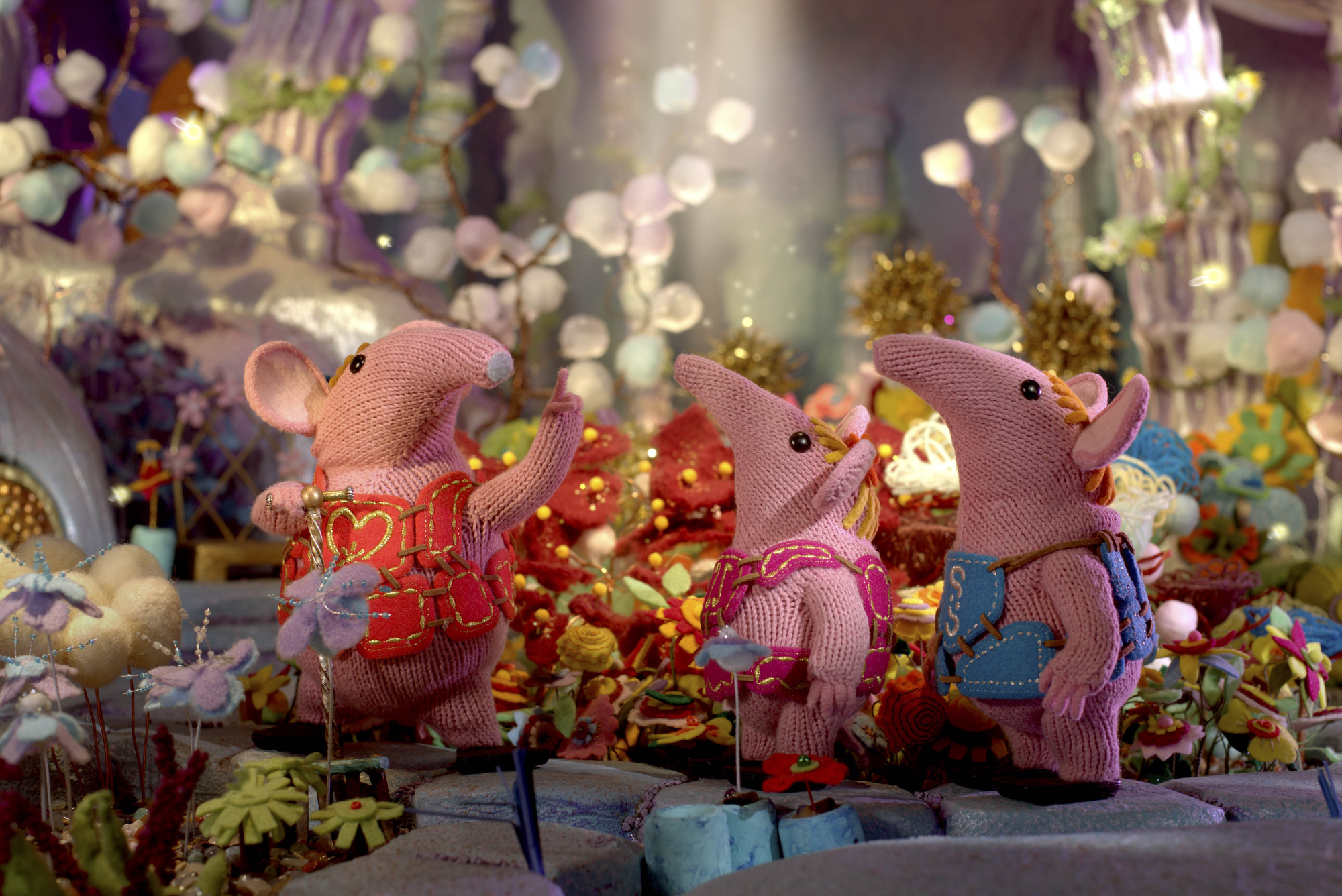 Tiny and Small visit Mother in her garden. She say she heard the notes of the tune coming from the sky. – (C) Coolabi, Smallfilms and Peter Firmin – Photographer: Production

After their debut in 1969, Mother, Major, Tiny, Small and Granny make their way home to BBC Television for the highly anticipated return of the Clangers.
Watch a Sneak Peak of the new Clangers
Featuring the loveable, pink, mouse-like creatures who communicate in whistles and eat soup from their little blue planet’s soup wells, the series will broadcast on CBeebies at 5.30pm from 15 June. 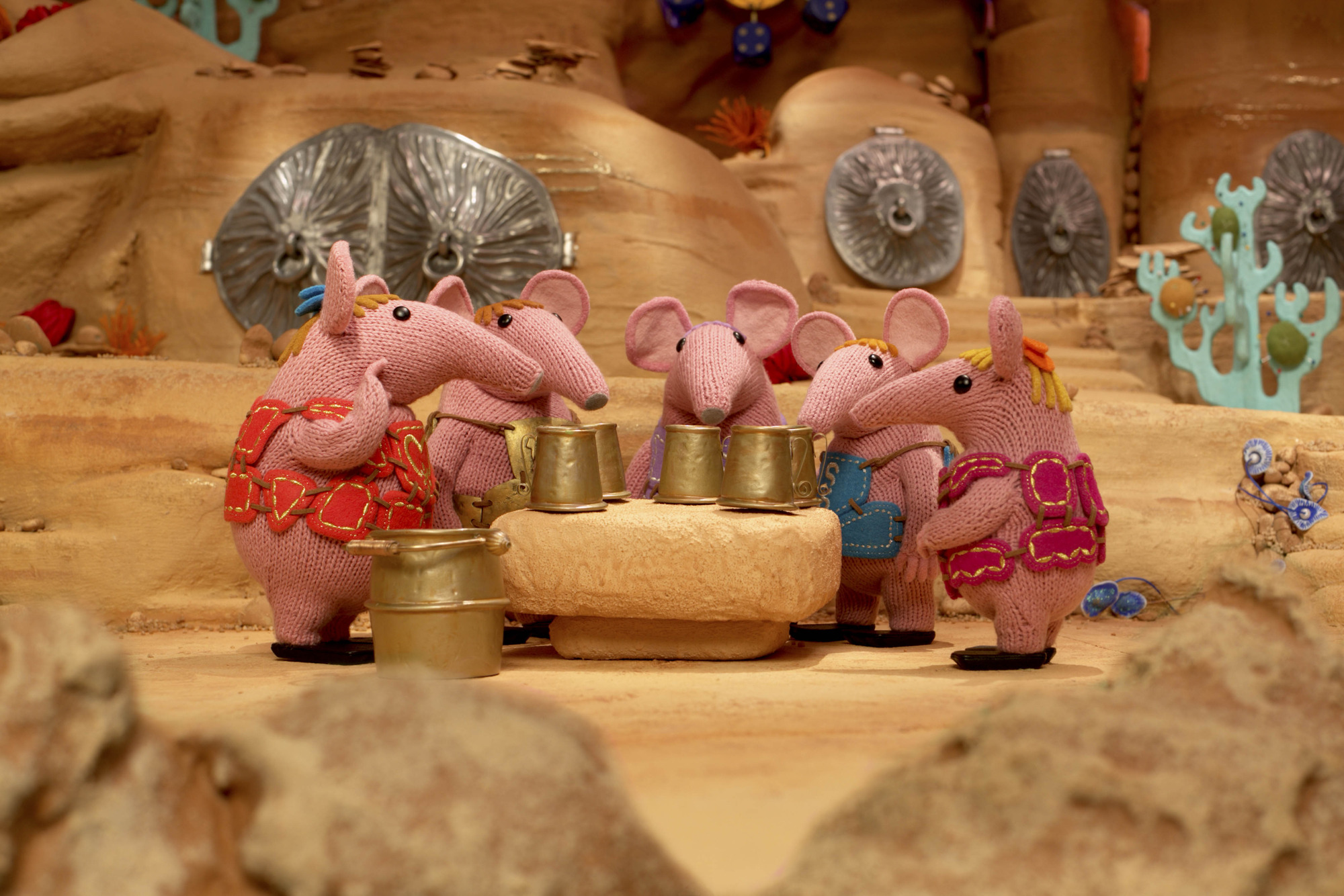 Small and Tiny tell the other Clangers about the Soup Dragon being grumpy. – (C) Coolabi, Smallfilms and Peter Firmin – Photographer: Production

The new series has all the magical, surreal, gentle, melodic elements of the original show and transforms it into an even more vivid, vibrant, technically improved production. It uses the same stop motion animation techniques as the original creators, Oliver Postgate and Peter Firmin, but with modern-day equipment, technology and a larger team.

The Clangers still live on a blue planet with holes topped with metal dustbin lids, which flip open with a ‘Clang!’ to reveal steps down to their home beneath the surface of the planet which contains a series of interconnecting tunnels and caves. And the new series also sees the return of some other favourite characters including the Soup Dragon, Baby Soup Dragon, the Iron Chicken, Sky Moos and Froglets. 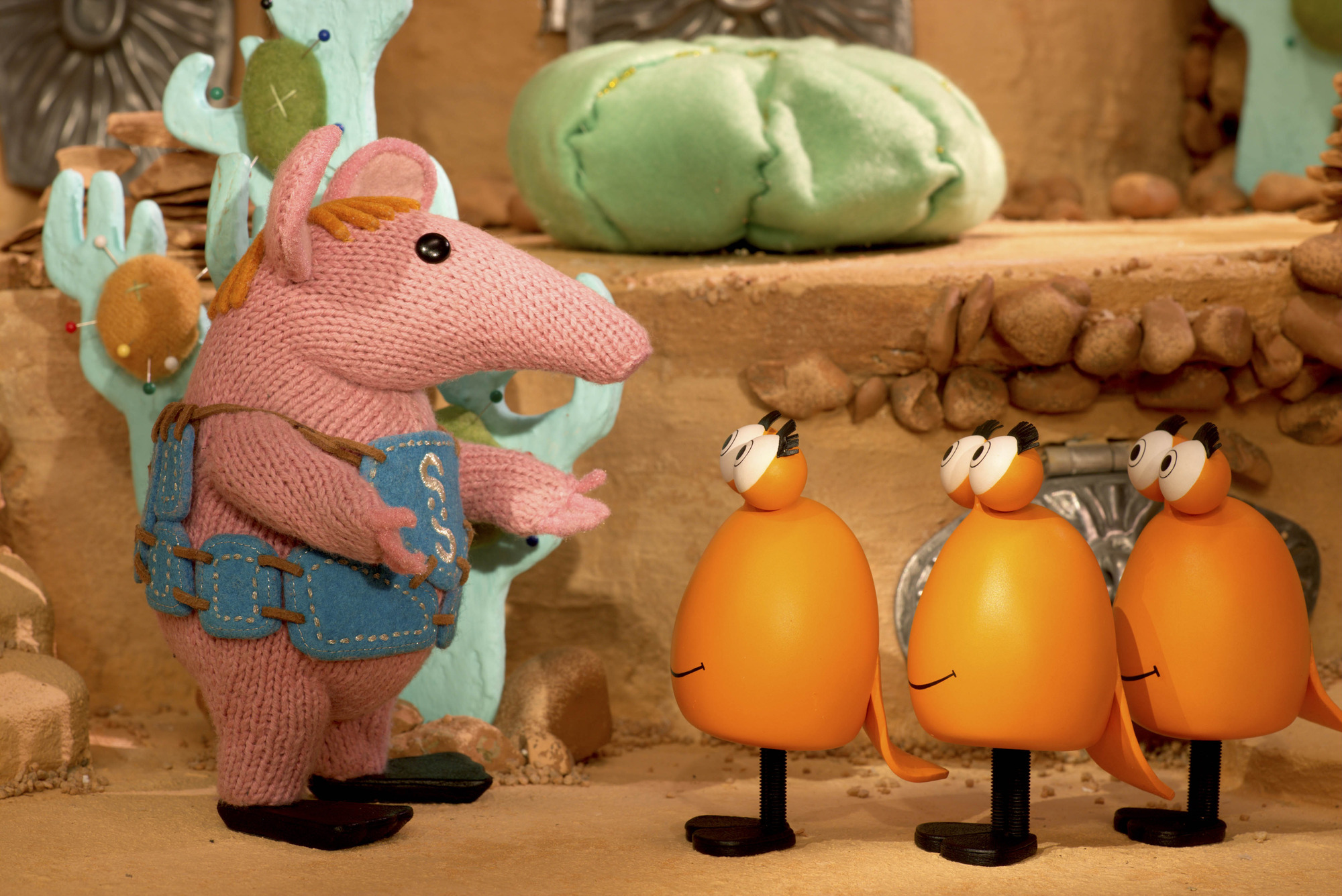 Small has a plan. He asks the froglets to help. – (C) Coolabi, Smallfilms and Peter Firmin – Photographer: Production

Great storytelling remains at the core of the show. Each episode centres on members of the Clanger family solving a problem, making a discovery, inventing something or greeting a new visitor to their small, blue planet. There are all manner of weird and wonderful objects and creatures that visit and they are often the catalyst for a brand new adventure for the Clangers and their friends. At the heart of the stories are universal themes of community, caring and resourcefulness with the aim of encouraging and nurturing a sense of wonder and natural curiosity.

Peter Firmin and Oliver’s son, Daniel Postgate, are actively involved in the new series as executive producers. Firmin is also part of the design process and Postgate is writing storylines and scripts.

Michael Palin, as the narrator, brings his very British brand of humour to the show and was the first choice of Peter Firmin and Dan Postgate to take over the mantle from Oliver Postgate. 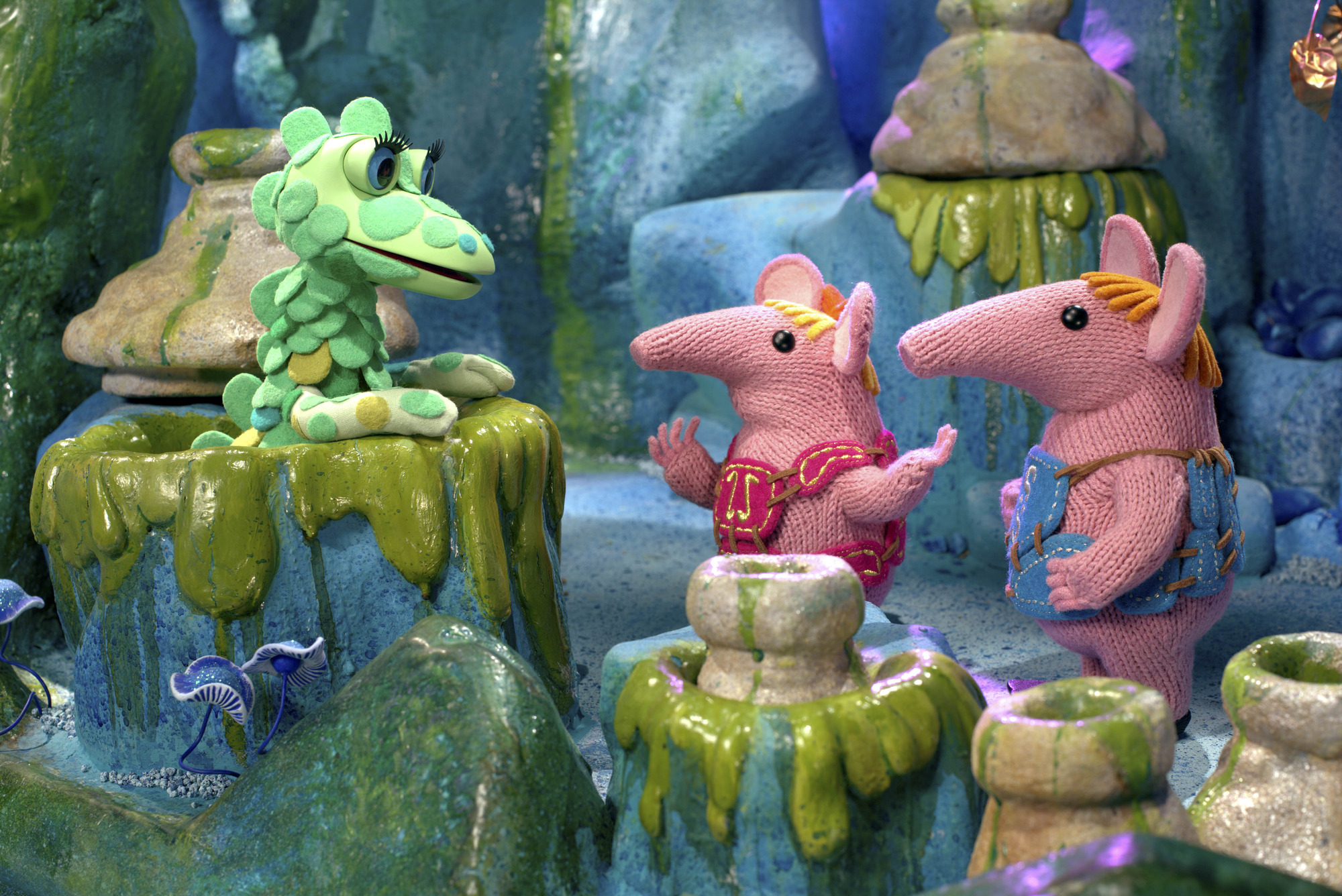 Tiny and Small visit the Soup Wells to ask the Soup Dragon if she has seen the notes. – (C) Coolabi, Smallfilms and Peter Firmin – Photographer: Production

The original Clangers were knitted by Peter’s wife Joan and the Clangers today are still hand-made by specialist knitters. Everyday materials and objects that are familiar to children – such as felt and cotton wool – continue to be used, transformed into flowers and trees.

Music also remains a crucial element to the show and notably the Music Trees produce musical notes which once picked for Tunes immediately grow back. 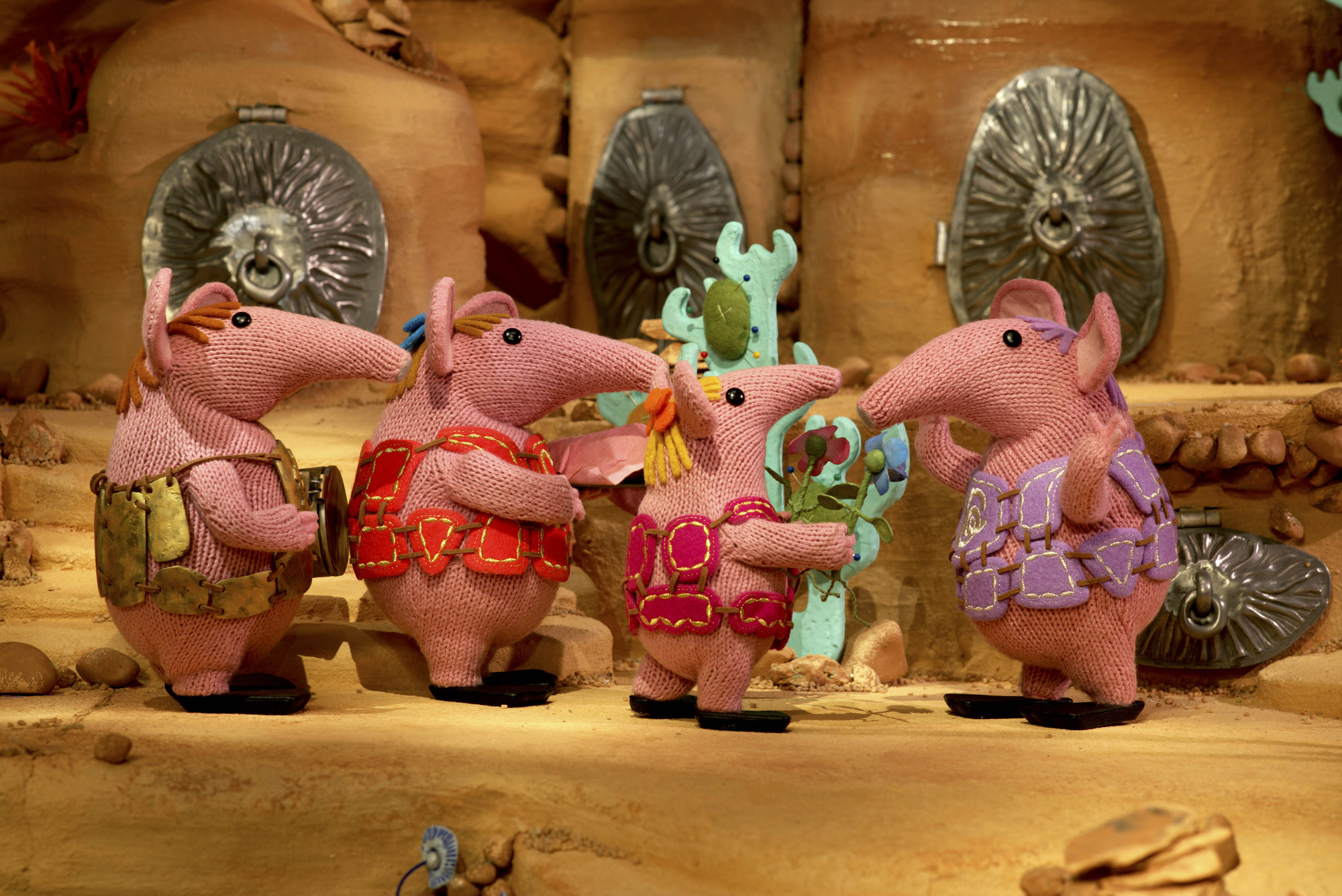 The other Clangers line up to give Granny the presents they have made for her birthday. Major, Mother, Tiny, Granny – (C) Coolabi, Smallfilms and Peter Firmin – Photographer: Production

The music score has been composed by John Du Prez (Grammy and Tony award-winner for Spamalot) and the title sequence recorder player is Sophie Westbrooke, Royal Academy of Music & BBC Young Musician of the Year competition winner (woodwind section).

Jackie Edwards, Executive Producer for CBeebies, says: “When we committed to this production over two years ago, it was with a belief that the Clangers had an enduring magic that would resonate with children today. The Clangers was always a good-hearted show, the characters thoughtful and kind and full of joy. This new series retains that good heart. Like the original, it is made with wool and a lot of love. I have never seen a crew so united in the single-minded vision of doing it right – of making it ‘Clanger’ and honouring the work of Smallfilms. While the new series is a brilliant homage to the original, it is also a contemporary work of beauty and joy that will delight today’s audience.” 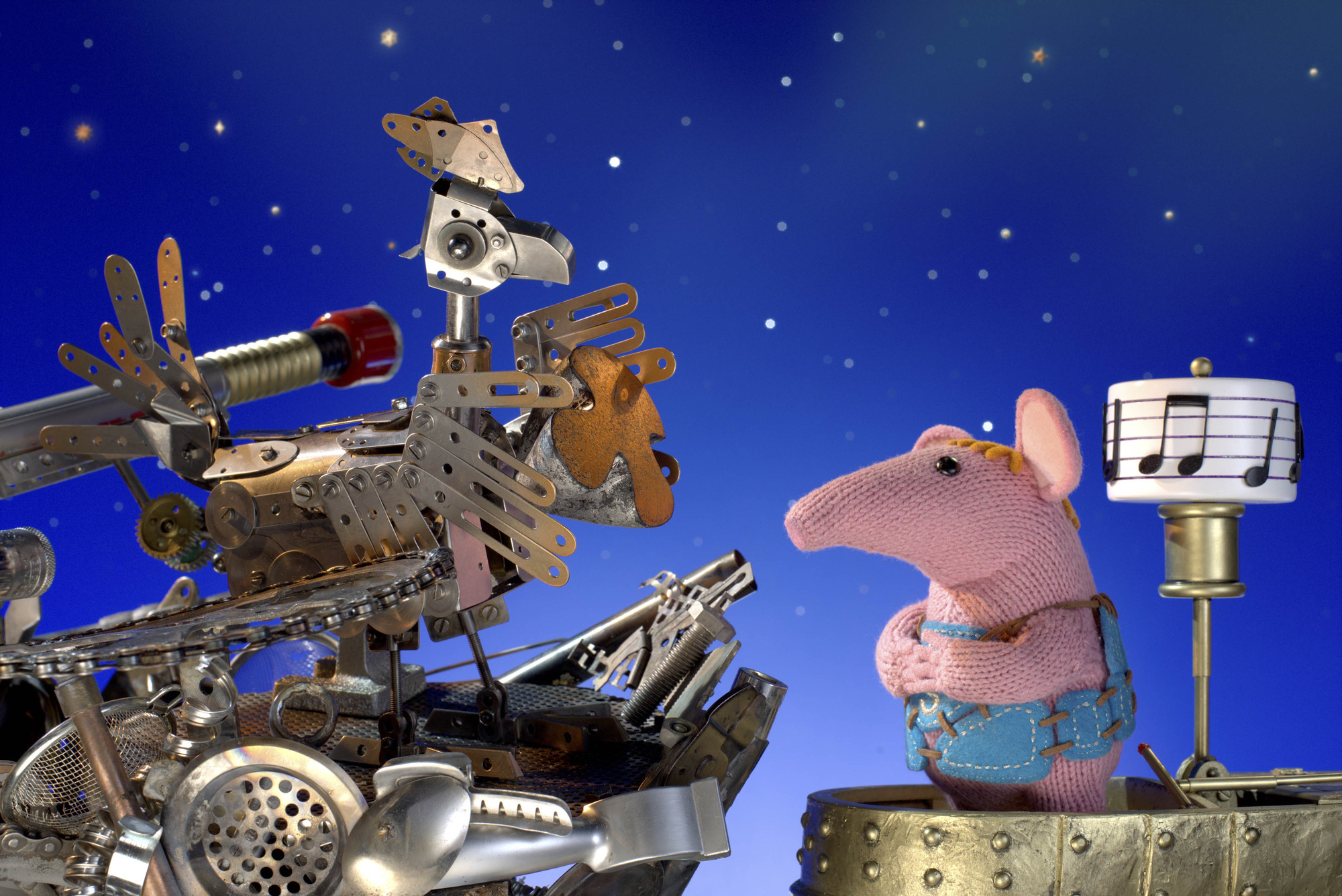 Small takes the strange thing up to show the Iron Chicken. He decides to give it to her as he has no use for it. – (C) Coolabi, Smallfilms and Peter Firmin – Photographer: Production

Jeremy Banks, CEO of Coolabi, comments: “When we started this journey with Peter and Dan, it was our vision to pay tribute to the classic Clangers brand, whilst creating a new show with appeal for today’s generation of pre-school fans and families. We’re delighted with the result; the love and respect that CBeebies, and our production partner, Factory, have for Clangers really shines through in the new series. We could not be more pleased.” 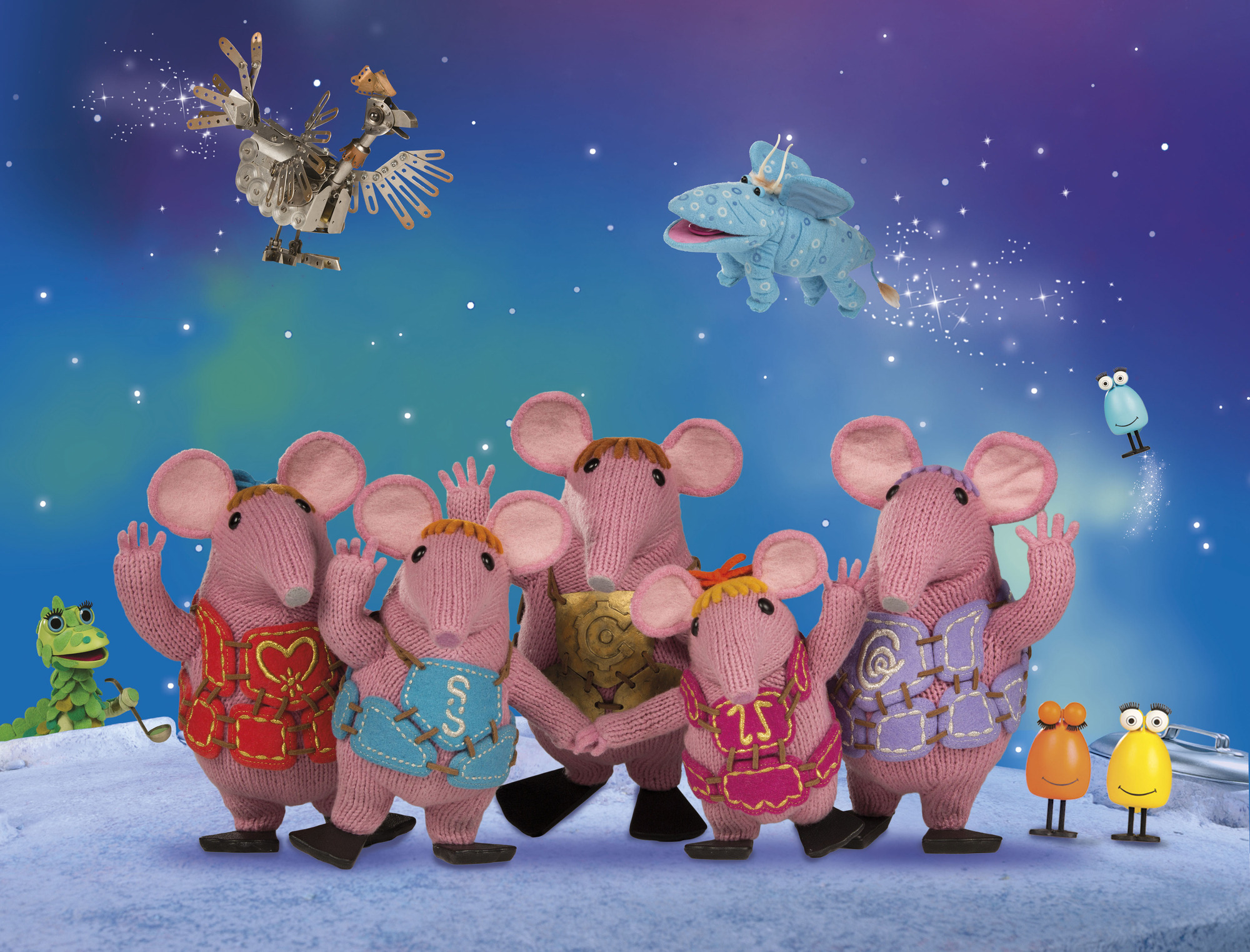 A Clangers game called The Clangers Magnificent Mend will accompany the series along with a raft of other online content, which will be available soon at bbc.co.uk/cbeebies

1. 300 cotton wool balls were used to create parts of the Clangers’ set, including the trees.

2. Three kilometers of wool were used to knit the Clangers Family.

3. Each of the characters’ tabards have personalised symbols; Small has an ‘S’ formed from question marks, as he is so inquisitive; Tiny has two musical notes to represent her love of music, and a T can be traced round them; Mother has an ‘M’ with a flower on that is also shaped like a heart, to represent her flower garden and her loving nature; Major has ‘C’ for Clangers and it’s a cog to represent invention; and Granny has spun wool shaped like a G.

4. Around 11 seconds of animation are produced every day, which equates to a full episode of animation every 9.2 days though, in reality, a completed episode takes much longer with the creation of animatic storyboards, recording sounds, filming, editing and post effects.

5. In the episode The Crystal Trees, the trees are made from ice and are actually filmed as they are melting, this is played backwards so they appear to be growing. 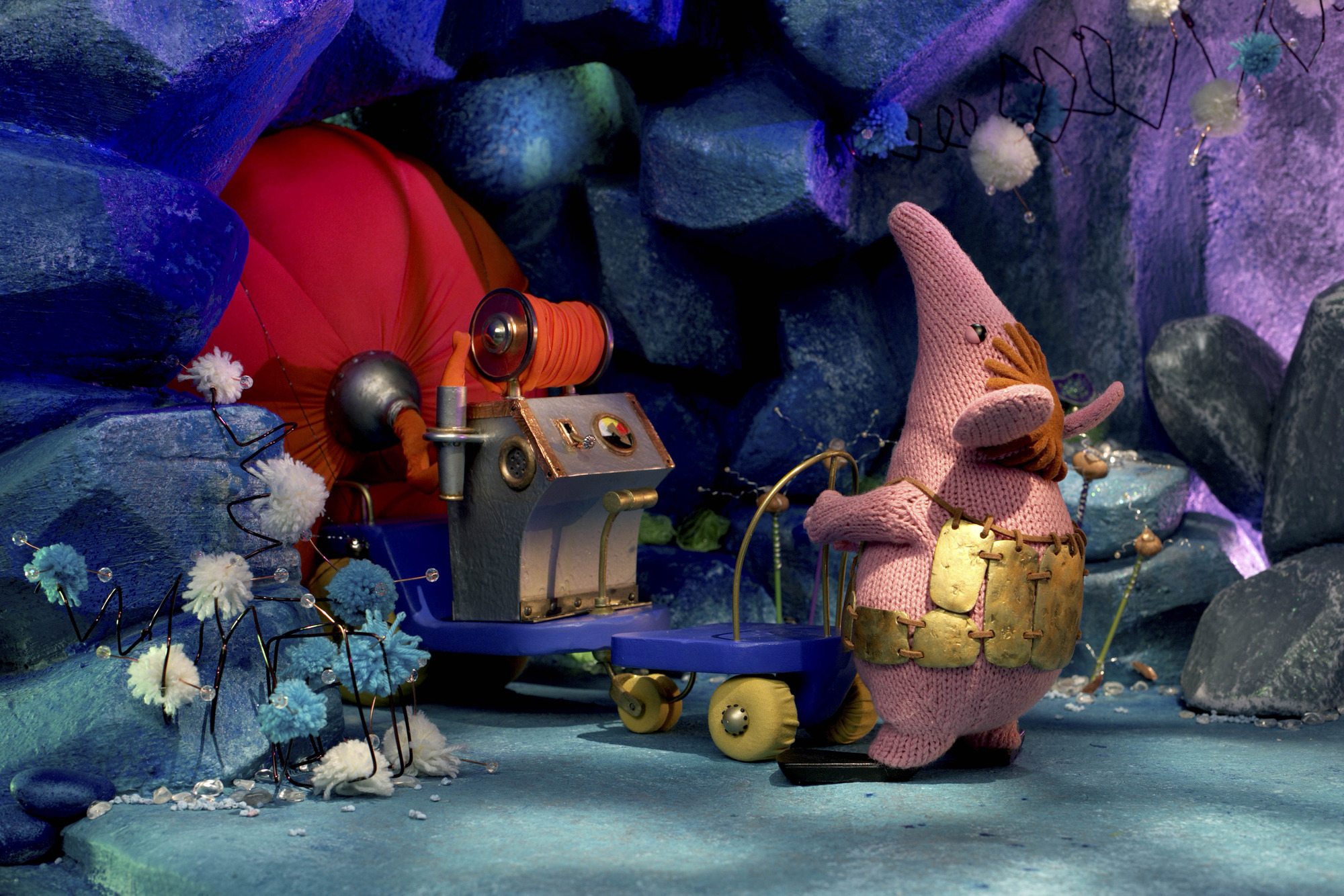 Major takes the machine, now full of soup and pulls it through the caves. But it gets stuck. – (C) Coolabi, Smallfilms and Peter Firmin – Photographer: Production

6. The flag that the spaceman puts up in the first, original series has details of stars in one corner and a hammer and sickle in the other as Firmin and Postgate say they did not know who would get there first, the Russians or the Americans.

7. When the spaceman’s craft took off, the flame of the firework that Peter Firmin lit to launch it set fire to the polystyrene in the set and had to be extinguished. You can see the flame left behind in one shot.

8. The original Soup Dragon has one of her hands darned. Oliver left her overnight with a chocolate penny in her paw and the mice in the barn nibbled it, along with a bit of the Soup Dragon’s hand.

9. Starlings nested in the roof of the barn where the original Clangers was filmed. So before Oliver could start filming each morning, he’d have to mop their droppings off the planet’s surface.

10. The whistling sound the Clangers make is arguably a universal language. Oliver Postgate was once told by a German viewer that the Clangers spoke perfect German! 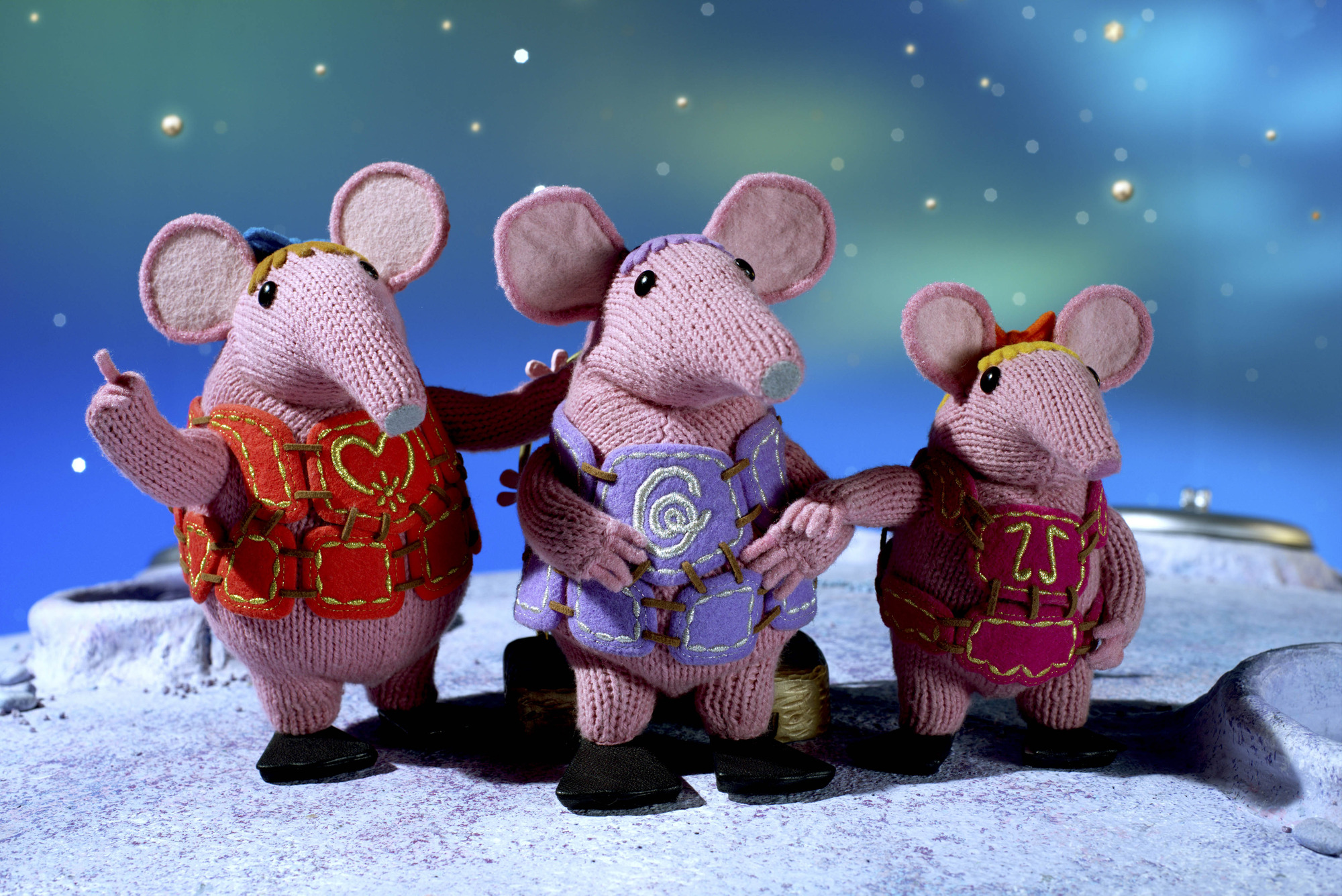 Small shows Mother a new invention. But Mother reminds him he is supposed to be making something for Granny’s birthday. Mother, Granny, Tiny – (C) Coolabi, Smallfilms and Peter Firmin – Photographer: Production

The return of The Clangers
Ballet Business In Print